After cleaning all our data, we moved on to EDA and making visualizations to see what features we can use to generate our model to predict COVID-19 outbreaks. The first thing we decided to look at was the vaccine distribution and adminstration per state to visualize our problem statement. Below we can see that distribution from the US government to individual states is based on population other than for Alaska.

Here is a visual that where we have the total vaccinations for the top 10 states and their populations on top. 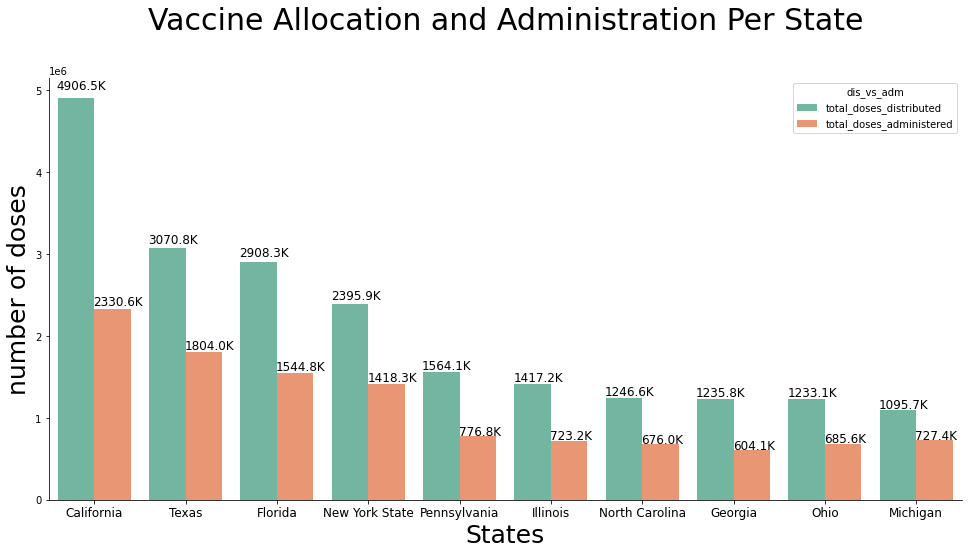 To see why the administration of vaccines was so slow, we looked at the number of people that had received a vaccine from January 16th. Interestingly, from January 16th to January 20th we don't see any change, and then we see a sudden spike afterwards. One thing that is concerning though is the number of people that have received their 2nd vaccine is lower than expected.

Afterwards, we looked to see if a survey conducted about mask use in each county was indicative of an area being more susceptable to COVID-19 outberaks. This turned out to not be the case as the discrepency between counties was very small and wasn't helpful. As many outbreak statistics are based on a per 100k population basis, we decided to scale our data the same way. Below are some plots showing the 7 day rolling average of newly confirmed cases and new deaths per 100k population.

Finally, we looked at the total number of cases based on population density in each county and plotted a map of it as shown below

If you want a deeper dive into our EDA process you can check out the notebooks below.